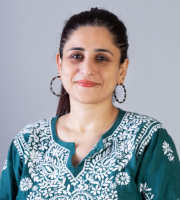 Zia holds a Master’s Degree in Counselling from the University of Notre Dame, Australia. Her experience as a counsellor with high school students began in 2003 at the United World College, Mahindra College, India. After working there for 11 years, Zia moved to the United World College, Mostar, Bosnia and Herzegovina and has recently joined the BIS community. In addition to being a counsellor at both the UWCs, Zia has also been teaching the IBDP Psychology course since 2003. Zia has been a part of the examining team for the IBDP Psychology programme since 2007 first as an Assistant Examiner and is now a part of the senior examining team as a Team Leader / Moderator. She has had an opportunity to be a part of the Grade Award meeting at Cardiff and a part of the Standardization Team, both for IBDP Psychology. Zia also worked as an Independent Contractor for Content and Assessment for the Psychology section of the Kognity International Baccalaureate online Psychology textbook. In addition to teaching and counselling, Zia has worked with students as faculty coordinator for the Model United Nations at both the United World Colleges and has pursued her passion for theatre by encouraging students and being a part of several high school-based productions with students. Her teaching philosophy resonates with what Jens Waltermann states: “Young people come with an urge for purpose. We should use this energy to support them in dealing with the pressing challenges of our time. Our role is to educate them today with values so they become ethical leaders.”