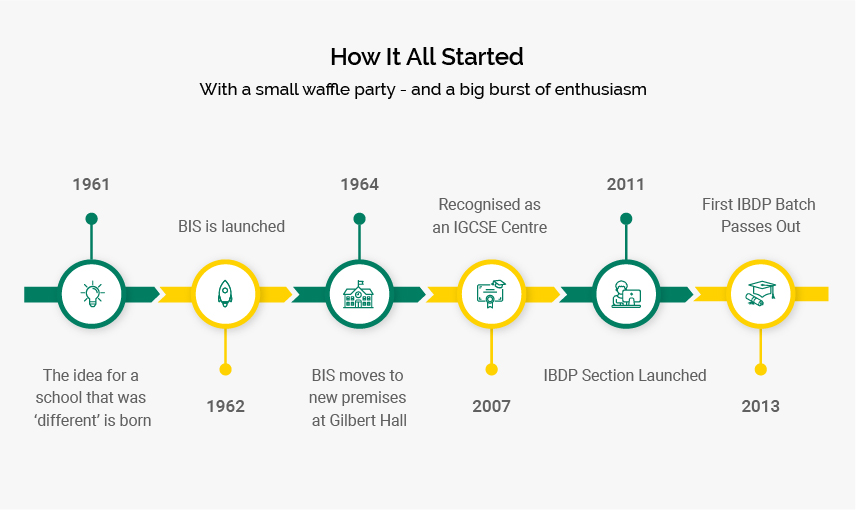 It was 1961, and a group of young mothers were sitting together at a waffle party, sipping coffee and discussing the strict and uninspiring schools in Mumbai. Many of the women were expatriates, some were Indian. But they all hated the idea of exposing their children to academic pressure, punishment and rote learning. It was at that point that one mother suggested getting together and setting up an informal little school in their own drawing rooms and back-gardens.

The idea of a gentle and happy school held enormous appeal, and both expats and Indians responded wholeheartedly. Within months, the Bombay International School Association was registered.

Eventually 183 people signed up as founder members. The impressive list included artist Jehangir Sabavala and his wife Shirin. Also Page and Harsh Mehta, whose father Jivraj Mehta was the first Chief Minister of Gujarat and mother Hansa Mehta was Vice-Chancellor of Baroda University. Then there was H.J. Kania, who later became the Chief Justice of India and Dr. Suma Chitnis who later became the Vice-Chancellor of SNDT University. Not to forget H.M. Seervai, the then Advocate General of Maharashtra, and Kamla Bhoota who founded the Bal Vikas nursery.

On June 11, 1962 about 90 children entered their new school—accommodated in six rooms and a terrace near Napean Sea Road.

Along with all the excitement and chaos—not to mention the new mother-run kitchen and bus-routes—came problems. The landlord at Bhavani Bhavan asked BIS to leave. The school managed to buy Gilbert Building at Babulnath and moved into its very own home in 1964.

Once it settled down in Gilbert Building, BIS began to grow, flourish and experiment. And more than 50 years later, students continue to benefit from the brave blueprints and unusual ideas generated in those early years.

From the outset, the philosophy with which the school was started was enshrined in practice.

July-August 2016 New Principal at BIS
Dr. Cyrus Vakil takes over to steer the BIS journey in its next new phase

January 2018 Gilbert Building gets a new look
Students and teachers return to their familiar, but now completely modernised, home

It’s been an eventful and colourful journey which has brought us from the baby steps taken in early days to the huge strides the school has made as a beacon of quality education and a institution for the all-round development of the children who study here.