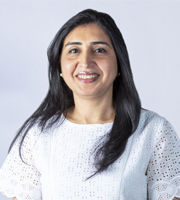 Born in Santa Cruz de Tenerife – Spain, in a Sindhi business family, Rekha grew up surrounded by warm and loving Spanish people. Needless to say Spanish was her first language and Spanish culture close to her heart. Although, political instability in the region called for her to relocate to India with her parents, she was still connected to the Mediterranean island through family, friends and of course the language.

After graduating from Jai Hind College in Arts she procured a Diploma in Administrative Management from NMIMS. Rekha then worked with HDFC Bank for 5 ½ years during which she was a Branch Manager and headed the Bhulabhai Desai Road and Kamla Mills Branch.

Popularly known as the Sindhi from Spain Rekha started informal Spanish training for friends at college and work here in Mumbai in 2012.
During the process, she realized that although she spoke the language fluently since she had never taught the language formally to anybody she wasn’t sure of how to teach Spanish grammar. So, Rekha decided to enroll at a Spanish Institute where she studied the framework of grammar and eventually started to teach.
While teaching the language she felt the need to take a number of courses and exams such as the DELE examination which equipped her to teach students studying the language at the IBDP level. She has now been tutoring students of various age groups for over five years.