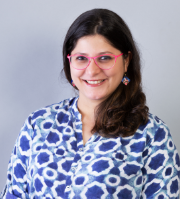 Azmin has done her B.A., M.A., and B.Ed. from BTTC. After receiving ‘The most promising teacher and all-rounder award from BTTC, she has been working with BIS since 2011. She is the Team Leader for Performing Arts and Events at BIS and enjoys teaching English (Language and Literature) in Middle School and Cambridge IGCSE Drama in Senior School. She is also a certified PYP teacher and has experience with young toddlers as well.
She has conducted workshops on Creative Teaching Styles for teachers from the Akanksha Foundation and also on creative activities. She has attended the IGCSE workshop on Checkpoint English and Drama. She has also attended several workshops in theatre, the latest one, conducted by Fenella Kelly. She has been invited on multiple occasions by The Bombay Teachers’ Training College to conduct workshops in drama for trainee teachers. She has also been invited to judge elocution competitions at various reputed schools such as The Cathedral and John Connon School, St.Mary’s ICSE School, The Alexandra Girls’ English Institution, to name a few. Azmin has also organized workshops at Kitab Khana on Ecology and Peace. She has conducted in-service training for teachers within her own school to promote greater levels of confidence through her workshop in drama. Besides training students for inter-school events in speech and drama, Azmin also mentors students in school before their elocution and debate competitions (English, Hindi, Marathi), and drives the Founders’ Day at BIS. She has been instrumental in ensuring that BIS has bagged the BEST SCHOOL TROPHY in the Pearl Padamsee Speech and Drama inter-school competition for two years in succession.

Besides teaching in school, Azmin acts professionally and pursues her passion for the stage. She believes Theatre is a way of life and is therapeutic. She enjoys sports, athletics and is also a qualified Girl Guide.

Azmin is an extrovert and is open-minded. She enjoys teaching creatively, believes in each student and the power of teamwork. Her goal is to strive to ensure that every child is happy, achieves his/her potential and respects differences, while being appreciative of those who have contributed to their growth.

Writing poems and organizing and planning events is her forte, while upholding integrity and valuing human resource is her strength. A team player who believes ‘leaders must be doers first’, she enjoys challenges and believes in Paulo Coelho’s statement, “I don’t know what’s going to happen tomorrow… That’s why I don’t save my best for the last.” She thus believes in performing her best every single day. Her motto is to keep herself ignited while ensuring that everyone around her is illuminated with joyful radiance at the same time.