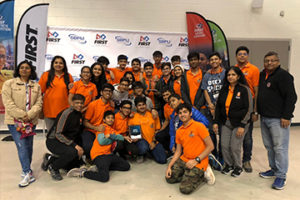 Two students of BIS – Anirudh Jhunjhunwala (Grade 9) and Aarushi Shah (Grade 11) IB – were members of the team from India that won a number of awards at the First Robotics Competition (FRC) Destination Deep Space season held at New York in March 2019.

They represented Team 6024 R Factor; the first and oldest FRC team from India which had participants from many other schools.

There are 4000 active FRC teams globally and this contest has been live since 30 years. However, till now only three of them are from India.

The aim of the team was to create a sustainable STEM ecosystem in our country where Science & Technology are celebrated by various stakeholders and the youth is encouraged to imbibe life skills and become technology leaders.

With immense passion, hard work and team spirit for robotics as well as consolidated efforts and inspiration from the mentors, the team won many awards and accolades –

This team has qualified for the first World Championship to be held soon.